Cyber crime victims: What do they have in common?

There are plenty of stories about cyber crime affecting companies and individuals in the security industry and mainstream media – companies having data stolen, personal data being used for fraud, phishing scams, identity theft/fraud and ransomware being used to extort money.

The question is how can you and your business learn from these past cases and reduce your own exposure to the same sorts of attacks?  It is easy to take one of two quite opposite views:

The reality is that most scenarios that have occurred are somewhere in between these two extremes and those cases we see publicised, where data is lost and systems go down, are a combination of a clever attack, an opportunity, some luck and a degree of foolishness or negligence on the part of the organisation affected (and indeed often on the part of the perpetrator for getting caught).  This is in addition to the relative strengths of the technology deployed by the attacker and defender.

Cyber crimes that are opportunistic or lucky

It is always easy to speculate as to whether an attacker got lucky finding a company that could be exploited, or if they found a particular weakness in a particular case, maybe a phishing campaign netted a certain number of victims or some credentials or an exploitable exposure was stumbled across.

Conversely one can often see organisations that have problems present for some time before one day they are used against them, but have been “breach-free” and lucky to avoid attack for years up to that point.  We also see cases where, despite policies and training and a variety of technical controls, some obscure and convoluted chain of events leads to a breach that was easy to see with hindsight, but much harder to predict or prevent, ahead of its occurrence.

Of course we can learn from these cases – either the ingenuity or good fortune of the attacker or the oversight of the victim, but in any given case the “stroke of luck” or random opportunity that an attacker finds and uses to gain access to your networks, systems and data will be different and specific to you (you are simply reducing the risk of those opportunities that have previously been encountered re-occurring).  Similarly, the good or bad luck that determines whether or not you suffer a breach made possible by some deeply hidden vulnerability is (before it happens) just as unpredictable.

Cyber crimes can be both complex and trivial

It is said that “beauty is in the eye of the beholder” and when it comes to cyber crime that is also true of complexity. 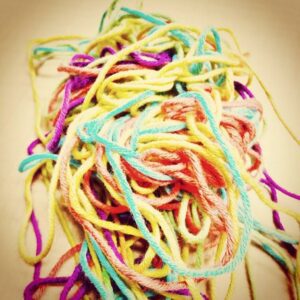 Cyber crimes can be complex to untangle

An attack that is well practiced, supported by a high level of knowledge and well-developed tools might be relatively trivial to an attacker (especially given the identification of a vulnerable and unlucky target as described above).

Detecting, understanding and reacting to that same attack for the company or individual affected can be much more complex as they don’t know ahead of time the method of access, the motive, the routes taken, the data stolen etc.   That all has to be pieced together from often sparse or incomplete records of network or system activities; a trail of breadcrumbs left in the attackers wake.

Certainly a cyber attack can be complex to diagnose when you don’t know what’s happened and are under pressure from customers, managers, the press and regulators to figure it out. Like any investigation of a crime, there can be a lot of work and deduction involved.

The comparison between complexity and simplicity is even more acute because some attacks are simple to mount but complex to defend against and from the defenders point of view some security controls and processes should be simple (for example patching of operating systems and applications – just do it, right?) but are actually very complex to do and get right (in that same example due to support issues, system downtime, the plethora of systems and OS and applications versions).

The reality is that you need to be able to defend against trivial attacks that can and will succeed and hurt your business.  Any assumption that an attacker won’t find an easy way in is flawed.  When these do occur the level of embarrassment at having been compromised due to a weak or default password, an unpatched vulnerability or a simple SQL injection flaw is a significant factor in the scale of impact. This is an easy lesson about cyber crime and cyber security to learn.

It is more difficult to learn lessons from complex attacks as by their very nature they are more likely to be tuned and tailored to the organisation that they were targeted against and are less common (or less commonly detected).

Sophisticated and targeted attacked are more specific, so less able to be learnt from, but there are families or similarities that can be drawn out of past breaches that do hold lessons for those trying to prevent cyber crime in their own environments.

However, after the trivial generic issues are identified and resolved, and then the more specific past lessons have been learned to improve defences, you will still be exposed to those weaknesses that are unique (and hence uniquely vulnerable) in your environment.

So what becomes vital (and evident as a lesson to learn) is to be able to detect and respond quickly and effectively when a highly targeted and complex attack or crime does occur.

Cyber criminals can be Insiders or Outsiders

There is much talk about the threats from external attackers – whether that be organised criminals, opportunist amateurs, APT groups or well-funded nation state-sponsored attackers. However, there are risks of course from insiders – people with legitimate access to the network or your data. These could be employees, contractors or third parties and the method of attack could be deliberate or inadvertent as they either commit a cyber crime, allow one to take place or become an unwitting pawn in an attackers phishing trip.

These insider issues can be only ever partly addressed by setting policy, defining procedures and running awareness campaigns as people will still make mistakes or circumvent controls if they feel disgruntled or are trying to do their job in the most efficient (to them) way.

For many attackers it is the information leaked by insiders, or the vulnerabilities introduced by them, that allows their external accesses or data thefts to become possible.  A valid M.O. might be to compromise someone internally, not through bribery or blackmail, but simply by calling or emailing and effectively social engineering access into systems or buildings by being convincing enough to get away with it.

Dealing with the fallibilities of human nature is a foreseeable challenge.  Consequently, having a sound approach to controls on what privileged accounts holders can and can’t do, applying the principles of least privilege for data and system access to the rest of the user population, and ensuring there is appropriate (but proportionate) monitoring of network and system activity to detect accidental breaches of security policies or deliberate attempts to steal or corrupt information, are all vital.

Cyber crime: What can we learn from past victims?

The challenge with learning from the past victims of cyber crime is that there are so many lessons to learn,  Picking the most appropriate ones for your business is almost impossible.  Certainly until a breach or attack occurs and your particular vulnerability is exposed.

Learning lessons from the UK’s National Health Service (NHS) and WannaCry you’d start by sorting out patching, avoiding another Edward Snowden means tightening up admin privileges. To avoid being the next Talktalk means checking and rechecking for SQL injection vulnerabilities.  Which is the first priority?  Of course they all are important.

For every common attack theme that you can build defences around, there is a unique attack that affects one business, hopefully not yours, but until it happens you just don’t know. The root causes for breaches or past cyber crimes that have occurred are often similar, but if there is one over-arching theme it is that successful attacks and cyber crimes occur through a route that should have been expected, but just wasn’t on the day.

We can draw two conclusions from this.  Firstly, it is vital to have a good overall level of cyber hygiene and have addressed the commonest security failings that attacks exploit – things like patching, controlling admin accounts, having backups etc. – partly to prevent attacks in the first place and partly so that if you do suffer a breach it is not because of something obvious and trivial.  Secondly, as we’ve seen unexpected attacks can still occur, it is vital to have sufficiently good monitoring systems in place to enable you to detect these and understand quickly what they mean and what to do about them.